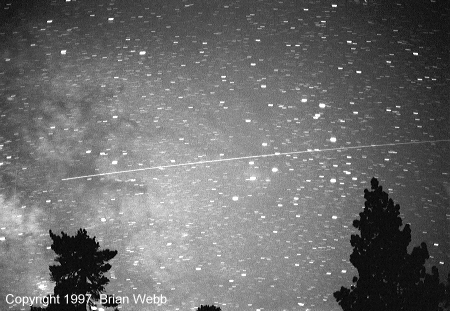 Photographing artificial earth satellites is a challenging facet of astrophotography that requires only simple equipment, a dark sky, a good technique, and a measure of luck.

The suggested equipment is relatively simple and consists of:

The precision compass and clinometer are very useful, but not absolutely necessary.

The following table lists several films for satellite photography. With the exception of TMAX P3200, they are all color print emulsions. There are probably other suitable films, but I've only listed those I've actually used with good results. One film I do not recommended is Konica SR-G3200; it's so grainy the images it produces are unusable. A good rule of thumb for selecting a film is to read the various astronomy magazines and see which films veteran astrophotographers are using.

The choice of photo location is important. A dark site is preferred because it allows you to photograph faint satellites and minimize film fogging from manmade light pollution. Try to avoid locations with air traffic; airplanes have a tendency to fly through your camera's field of view at the worst possible time.

Speaking of light pollution, if you're trying to photograph faint satellites, be sure to avoid natural light pollution as well and limit your photography to times when the Moon is invisible or a thin crescent.

Satellite pass predictions tell you when satellite photo opportunities will occur and where to aim your camera. However, before you can generate predictions, you must first determine the latitude, longitude, and elevation of your photo location as accurately as possible3. Use a topographic map, aeronautical chart, or a web site such as the U.S. Geological Survey's Geographic Names Information System or the National Imagery and Mapping Agency's GEOnet Names Server to find this information.

Once you know the coordinates and elevation of your site, you can generate predictions. There are two ways to do this:

Satellite pass predictions are available from several web sites including Heavens Above, the Earth Satellite Ephemeris Service, and NASA.

There are also several satellite pass prediction programs that you can install on your computer. These include SkyMap, STSPlus, TrakSat, WinSat, etc. For a complete listing of software, go to Satellite Related Software.

Regardless of the method you use, be sure the predictions are based on recent orbital data. This is especially true for satellites in low orbits (below 400 km) such as the International Space Station. The lower the orbit, the faster the actual pass parameters (times, elevation, azimuth, etc.) will vary from the predictions.

Graphic pass data shows the trace of the spacecraft across the sky with an azimuth and altitude grid, background stars, or both. Plots with background stars are especially useful because they allow you to aim your camera without a compass or clinometer by using stars as landmarks.

Unless you specifically intend to photograph faint objects from a dark site, examine the remaining records again. Cross out those belonging to medium- to small-sized objects. The preferred targets for beginners or those photographing from less than dark sites are Russian Cosmos and Intercosmos satellites and the spent upper stages of rockets from all nations. Russian space hardware is much larger than that of other nations, and thus easier to see. Make a list of the passes in time order with the time, azimuth, and elevation.

Before going to your site, set your watch to an accurate time standard. Various governments provide time signals via radio and telephone. An excellent source of accurate time is a GPS receiver. But be aware the indicated time could be incorrect if the receiver hasn't recently locked-on to GPS satellites and updated its clock.

Several minutes before a predicted pass, use the compass and clinometer or graphic to aim the camera at a point in the sky through which the satellite will pass. Open the camera lens' iris according to the film speed and sky background in the following table and set the shutter for a time exposure. When referring to the table, keep in mind that the times listed are the theoreticial maximum exposure.

Begin looking for the satellite a couple of minutes before the predicted pass. This is especially true if the spacecraft is a low orbiter because they often appear early. Also, be prepared to quickly open your camera's shutter.

If you are photographing medium and high-altitude satellites with a 50mm lens, open the shutter 30-seconds before the satellite's predicted passage through the center of the field of view. You can then quickly look up and see if the satellite is visible5. After 60 seconds, close the shutter.

Luck is an important factor in successful satellite photography. When attempting to photograph fainter objects, it usually takes about ten exposures to get one good photo.