These two photos were taken during the 2001 December 3 night launch of an OSPTLV (modified Minuteman II) missile from Vandenberg AFB. The vehicle sent an unarmed reentry vehicle (warhead) and balloon decoy on a ballistic trajectory to the central Pacific. The warhead and decoy were launched for the Integrated Flight Test 7 (IFT-7) missile defense test. A prototype Exoatmospheric Kill Vehicle (EKV) was later launched from the Kwajalein Missile Range and successfully intercepted the warhead above the atmosphere. Both photos were taken by Brian Webb from Vandenberg AFB while covering the test for a news organization. 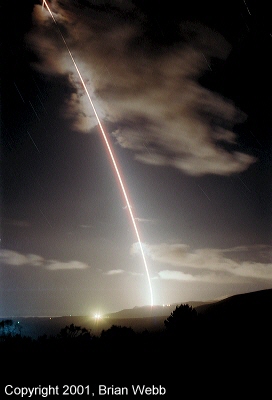 This photo is a time exposure that shows the OSPTLV leaving missile silo LF-06 at northwest Vandenberg. 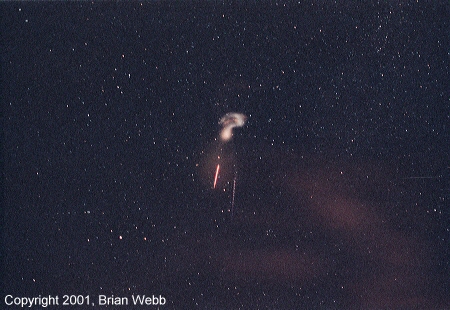 The second time exposure photo was taken early into the second stage burn. The ?-shaped cloud is the smoke puff from second stage ignition. The thick orange line is the trail from the burning second stage. The thin line on the right was caused by the jettisoned first stage. It was still burning as it tumbled end over end. The dots in the background are stars.