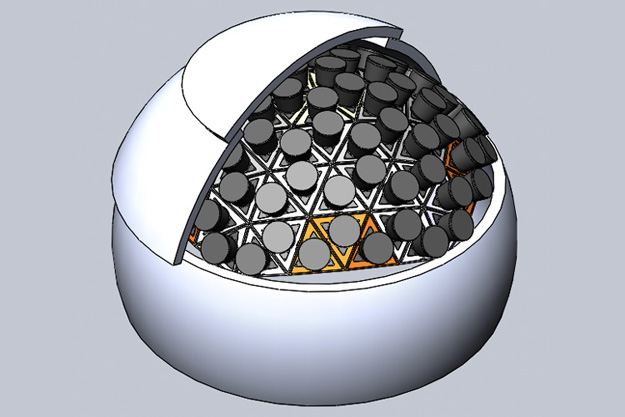 Each PANOSETI observatory will house a geodesic dome of 80 innovative telescopes that can image about one-third of the heavens every night in search of sub-second pulses of light from intelligent civilizations in our galaxy. (Graphic courtesy of Shelley Wright, UCSD)

Are advanced civilizations in our galaxy trying to communicate with us by means of laser blasts? A team of University of California, San Diego, UC Berkeley, Harvard University and California Institute of Technology astronomers are building a pair of fly's-eye observatories to find out.

In early February, the scientists finished installing two prototype telescopes at Lick Observatory near San Jose, California, the first of hundreds of planned telescopes for a project called Panoramic SETI, or PANOSETI, for Pulsed All-sky Near-infrared Optical SETI. Eighty of these one-and-a-half-foot in diameter telescopes will be assembled into a geodesic dome, like the faceted eye of a fly, to collect optical and infrared signals from a big chunk of the Northern Hemisphere sky in search of split-second flashes of optical or infrared light.

"The goal is to basically look for very brief, but powerful, signals from an advanced civilization. Because they are so brief, and likely to be rare, we plan to check large areas of the sky for a long period of time," said UC Berkeley's Dan Werthimer, who has been involved with the search for extraterrestrial intelligence (SETI) for the past 45 years and is chief scientist at the Berkeley SETI Research Center. "This is the first wide-field survey for sub-second phenomena."

With its geodesic telescope array, each PANOSETI observatory would image about one-third of the sky every night in search of short-lived astronomical flashes that last seconds to nanoseconds, or a billionth of a second. The observatories would be built in pairs up to a mile apart to provide a stereo view of the night sky, essential to confirming and discarding light flashes coming from the atmosphere, rather than deep space.

"The deployment of two PANOSETI telescopes now offers us a new window into how the universe behaves at nanosecond timescales," said Shelley Wright, associate professor of physics at UC San Diego and principal investigator for the project. Wright first worked with Werthimer 20 years ago when she was an undergraduate student at UC Santa Cruz. She was a UC Berkeley postdoctoral fellow from 2009 to 2011.

Wright and her team, which includes Paul Horowitz from Harvard, as well as Lick and Caltech astronomers, eventually hope to build several pairs of these 80-telescope observatories around the world to image the entire heavens. The two prototype telescopes are now installed and undergoing testing in the Astrograph Dome at Lick, which is owned and operated by the University of California Observatories (UCO) for the benefit of astronomers across the UC system.

"This allows us to test our optics, our electronics, our detectors, our software, and get some preliminary data to get us confident before we go into full production," said Werthimer, who is also the Marilyn and Watson Alberts SETI Chair at UC Berkeley.

Wright and her team are now evaluating sites for the observatories and hope to begin observatory construction and telescope production in the next year.

A single PANOSETI telescope has a very wide field of view: 10 degrees by 10 degrees, the width of 20 full moons. This wide-angle view is made possible by a compressed lens design first used nearly 200 years ago to reduce lens weight and shorten its focal length.

The team is also developing specialized cameras in each telescope that can precisely measure when each photon arrives. Most current telescopes looking for short-lived astronomical phenomena such as supernovas -- Pan-STARRS in Hawaii and the Zwicky Transient Facility at Palomar Observatory in San Diego are good examples -- collect light that brightens and dims over seconds to months. Standard charge-coupled devices (CCDs) found in every camera and phone are good for this. But CCDs can't capture millionth-of-a-second flashes of light.

PET scanners' avalanche photodiode arrays, dubbed silicon photomultipliers, can. They were developed, for example, to detect photons of light from the annihilation of positrons emitted by radioactive tracers injected in patients to detect cancer metastases.

Both Fresnel lens telescopes and avalanche photodiode detectors are far cheaper than current options, making multi-eye observatories possible. The researchers are hopeful that the unique ability of these telescopes to image large areas of sky simultaneously for sub-millisecond light flashes will reveal never-before-seen astronomical phenomena, if not messages from other civilizations.

"PANOSETI explores the universe at billionth-of-a-second time scales, a time scale that earthlings have not examined well," Werthimer said. "When astronomers examine an unexplored parameter space, they usually find something surprising that no one predicted. PANOSETI could discover new astronomical phenomena or signals from ET."

Why would an intelligent civilization want to communicate with us via nanosecond flashes?

"One way to communicate or get your attention is a flash, like a lighthouse," Werthimer said. "It's very effective, because it's a bright, intense flash. If you put a lot of energy into a short time, the average energy can be small, but the instantaneous brightness can be incredibly large. It's like fast radio bursts, which appear for a thousandth of a second. But when they're on, they're the brightest thing in the sky, and you can see them a billion light years away."

Berkeley SETI already operates an optical telescope at Lick -- the Automated Planet Finder -- that looks for laser signals from other planets, though it also is blind to split-second flashes of light. UC San Diego and UC Berkeley also are collaborating on a new instrument currently operating at Lick, the Near-Infrared Optical SETI (NIROSETI) instrument, which is the first designed to search for signals from extraterrestrials at near-Infrared wavelengths.

Most of UC Berkeley's SETI projects collect radio data from telescopes such as the Arecibo telescope in Puerto Rico, the Green Bank Telescope in West Virginia and the Parkes telescope in Australia. The latter two are directed by Breakthrough Listen, a UC Berkeley-led project supported by a $100 million, 10-year commitment from Breakthrough Initiatives, founded in 2015 by Yuri and Julia Milner to explore the universe, seek scientific evidence of life beyond Earth and encourage public debate from a planetary perspective.

The PANOSETI research and instrumentation program is made possible by the support and interest of Franklin Antonio. UC Berkeley's PANOSETI efforts are supported by the National Science Foundation (1407804) and the Marilyn and Watson Alberts SETI Chair fund. The Bloomfield Family Foundation supports SETI research at UC San Diego in the CASS Optical and Infrared Laboratory, while Harvard's SETI research is supported by The Planetary Society.