A Delta II rocket carrying a NASA satellite is scheduled for launch from Vandenberg AFB, California next Saturday morning (September 15) during a 05:46-06:26 PDT launch window.

Following liftoff from Space Launch Complex 2-West, the rocket will climb vertically for several seconds before beginning a gradual turn towards the south. If the launch goes as planned, the Delta will place NASA's IceSat-2 elevation measuring satellite into orbit.

Weather permitting, the early portion of the launch could be visible to the unaided eye as far away as Santa Rosa, Marysville, Fresno, Bakersfield, San Bernardino, and Mexicali, California and Ensenada, Mexico. Observers located further east may have problems seeing the launch because of the brightness of the sky from the approaching sunrise.

The vehicle's flame will initially be a bright orange color due to the four solid rocket motors (SRMs) strapped to the rocket's first stage. Following SRM burnout and jettison, the spent motors will continue to burn as they tumble and fall away and may appear to flash. Meanwhile, the rocket's first stage engine will continue running and the Delta will resemble a slowly moving white star until Main Engine Cutoff (MECO) near stage 1/stage 2 separation.

If the launch occurs early in the window, the Twilight Effect will not occur because it's too early for the Delta to catch the sun's rays during the first stage burn. However, observers in dark locations may still be able to see the dim, tenuous exhaust plume behind the rocket. 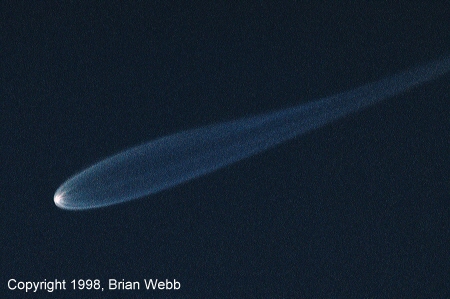 A Delta II rocket produces a tenuous exhaust plume following liftoff during deep morning twilight from Vandenberg AFB in late 1998. The launch occurred too long before sunrise for the sun to illuminate the first stage's exhaust.

However, there is still an opportunity for the Twilight Effect to happen. If liftoff takes place at 06:00, the vehicle will enter sunlight at T+ 3 minutes 55 seconds near the end of the first stage burn. A 06:26 PDT liftoff has the Delta entering sunlight much earlier at at T+ 1 minute 45 seconds.

If you plan to view the launch near the coast, be aware there's a real possibility the event could be obscured by low clouds or fog. For the best view, find an observing site above the haze or marine layer with an unobstructed horizon towards the launch site and downrange ocean area.

Regardless of where you plan to go to view the launch, allow yourself enough time to get there well before liftoff. After you arrive, be aware of your surroundings and possible hazards such as traffic.

For launch status and countdown information, go to:

For information on viewing Vandenberg rocket and missile launches, go to:

If you plan to use an Internet countdown feed for launch event cueing, be aware the feed may be delayed by more than a minute. Use a GPS receiver or another source such as the National Institute of Standards and Technology (www.time.gov) to obtain the exact time.