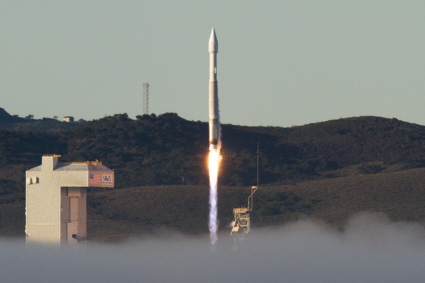 The DMSP satellite was built by Lockheed Martin and Northrop Grumman and United Launch Alliance builds and flies the rocket.

"This was our first launch of 2014 and I couldn't be more proud of this team of professionals," said Balts. "The team, which included the Space and Missile Systems Center, ULA, Lockheed Martin and Northrop Grumman, worked diligently to ensure that this launch was safe and successful."

The 4th Space Launch Squadron is in charge of mission assurance and safety for this launch operation.

"A launch like this takes teamwork and dedication," said Lt. Col. James Bodnar, 4th SLS commander. "Our mission assurance technicians and engineers have worked hand-in-hand with United Launch Alliance going over critical procedures and tasks to ensure this launch was successful."