This story was originally published on 2010 November 13

A mysterious trail seen in the sky west of Los Angeles around sunset last Monday may not be so mysterious after all.

When the I first heard of the trail, it was clear that the trail was caused by a missile launch from the Pont Mugu sea range or a high flying jet.

The area where the supposed launch took place is within an established military weapons test and training range controlled by the U.S. Navy. Over the years, a variety of rockets and missiles have been launched within the range from San Nicolas Island, the coast at Point Mugu, ships, and aircraft. Some of these missiles have been fairly large and capable of producing a thick smoke trail.

The Defense Department denied any knowledge of a missile launch from the range on Monday. The U.S. military takes safety and security very seriously and always issues the appropriate Notice to Airmen (NOTAM) or Notice to Mariners (NOTMAR) in advance. This is done for the specific date and time and time of the planned operation - even for classified operations.

Although NOTAMs and NOTMARs were in effect on Monday for the general area in question, they appeared to involve activities other than a land- or sea-based missile launch or were a permanent warning about offshore missile firings that has been in effect for years.

The other possibility is that the trail in question is a jet contrail. The area west of Los Angeles is one of the busiest air traffic areas in the U.S. High altitude aircraft flying in this area often produce contrails, especially during the cooler months of the year. Depending on your perspective, a distant jet contrail can look like a climbing missile or launch aftermath.

Over the years, people in southern California and beyond have been treated to impressive displays from rockets and missiles launched during dawn or dusk from Vandenberg AFB. Jet contrails present at dawn or dusk sometimes resemble rocket or missile launches. One such contrail seen in late 2009 caught the attention of the news media (refer to "Mystery deepens with video of 'launch' off O.C." at http://articles.ocregister.com/2009-12-31/blogs/24546879_1_images-rocket-crystal-cove).

It is important to note what is lacking with regards to this event. The ocean west of Los Angeles is used every day by numerous pleasure craft, fishing boats, and other vessels. Yet, I cannot recall hearing of an observation of this potential launch from an observer at sea. In addition, there appears to be few reports of a missile launch from observers along the coast. It is quite possible that many people saw the trail, but did not think it was a missile because from their location it resembled a jet contrail.

Also lacking were descriptions of the trail consistent with those produced by a missile. A dense trail such as that seen Monday could be produced by a solid fuel missile. There were no reports of the trail abruptly stopping, an event marking cutoff off the rocket motor. There was also no mention of the trail suddenly disappearing or reappearing, which is often seen during staging.

In addition, there were no reports after the supposed launch of the trail being twisted and contorted by high altitude winds. And finally, the trail was seen around sunset. Had the supposed missile trail reached the upper atmosphere, one would expect to hear reports of a luminous cloud in the sky during twilight like those produced by solid fuel missile launches that occur around dawn or dusk. 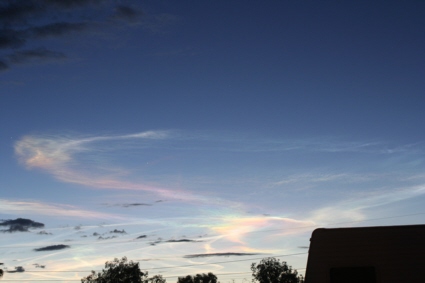 Sunlit missile exhaust paints the dawn sky following from an aborted missile defense test at White Sands, New Mexico in 2006. The test was halted when the Hera target missile had to be destroyed by range safety. Chris Wagner took this image from Queen Creek, Arizona, some 300 miles away. Copyright 2006 Chris Wagner.