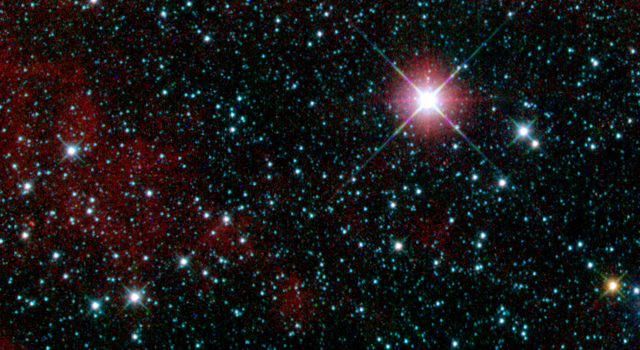 This infrared snapshot of a region in the constellation Carina near the Milky Way was taken shortly after NASA's Wide-field Infrared Survey Explorer (WISE) ejected its cover. Image credit: NASA/JPL-Caltech/UCLA

PASADENA, Calif. -- NASA's Wide-field Infrared Survey Explorer, or WISE, has captured its first look at the starry sky that it will soon begin surveying in infrared light.

Launched on Dec. 14, WISE will scan the entire sky for millions of hidden objects, including asteroids, "failed" stars and powerful galaxies. WISE data will serve as navigation charts for other missions, such as NASA's Hubble and Spitzer Space Telescopes, pointing them to the most interesting targets the mission finds.

A new WISE infrared image was taken shortly after the space telescope's cover was removed, exposing the instrument's detectors to starlight for the first time. The picture shows about 3,000 stars in the Carina constellation and can be viewed online at http://www.nasa.gov/mission_pages/WISE/multimedia/wise20100106.html.

The image covers a patch of sky about three times larger than the full moon, and was presented today at the 215th meeting of the American Astronomical Society in Washington. The patch was selected because it does not contain any unusually bright objects, which could damage instrument detectors if observed for too long. The picture was taken while the spacecraft was staring at a fixed patch of sky and is being used to calibrate the spacecraft's pointing system.

When the WISE survey begins, the spacecraft will scan the sky continuously as it circles the globe, while an internal scan mirror counteracts its motion. This allows WISE to take "freeze-frame" snapshots every 11 seconds, resulting in millions of images of the entire sky.

"Right now, we are busy matching the rate of the scan mirror to the rate of the spacecraft, so we will capture sharp pictures as our telescope sweeps across the sky," said William Irace, the mission's project manager at NASA's Jet Propulsion Laboratory in Pasadena, Calif.

To sense the infrared glow of stars and galaxies, the WISE spacecraft cannot give off any detectable infrared light of its own. This is accomplished by chilling the telescope and detectors to ultra-cold temperatures. The coldest of WISE's detectors will operate at less than 8 Kelvin, or minus 445 degrees Fahrenheit.

The first sky survey will be complete in six months, followed by a second scan of one-half of the sky lasting three months. The mission ends when the frozen hydrogen that keeps the instrument cold evaporates away, an event expected to occur in October 2010.

JPL manages WISE for NASA's Science Mission Directorate in Washington. The mission was competitively selected under NASA's Explorers Program, managed by NASA's Goddard Space Flight Center in Greenbelt, Md. The science instrument was built by the Space Dynamics Laboratory in Logan, Utah, and the spacecraft was built by Ball Aerospace & Technologies Corp. in Boulder, Colo. Science operations and data processing take place at the Infrared Processing and Analysis Center at the California Institute of Technology in Pasadena.