Portrait of a Star on Edge

Arlington, Va.--Astronomers have known for decades that Regulus, the brightest star in the constellation Leo, is living very close to the edge.

Only a few hundred million years oldyoung by stellar standardsRegulus has some three-and-a-half times the mass of our own middle-aged Sun, some 350 times its energy output, and a truly prodigious rate of spin. Our Sun makes one sedate rotation every 24 Earth days; Regulus whips around in less than one day. Indeed, its equator is moving at well over 700,000 miles per hourperilously close to the speed at which the outward-pointing centrifugal force would cancel out the inward pull of the stars gravity. If Regulus were spinning even 10 percent faster, it would tear itself apart. 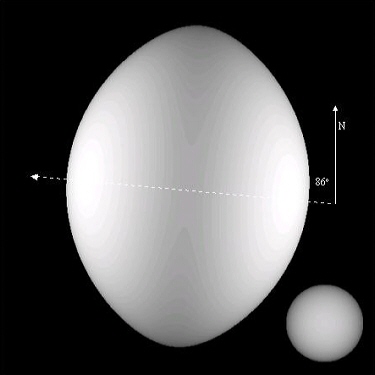 A computer-generated model of Regulus based on CHARA data, with a similar model of the Sun shown to scale. This view shows the model almost equator-on, with its axis tilted 86 degrees from celestial northjust as Regulus appears in the sky. That makes the axis almost horizontal in this picture, and the equator almost vertical. The star's frenetic spin has distorted it into the shape of a squashed beach ball.
Credit: Wenjin Huang, CHARA, Georgia State University

Scientists at Georgia State Universitys Center for High Angular Resolution Astronomy (CHARA) have now detailed some of the consequences of such behavior. Using their recently completed array of optical telescopes atop Californias Mount Wilson, the CHARA astronomers have measured Regulus size and shape, the temperature difference between its poles and equator, and the orientation of its spin axis.

Their results are summarized in this computer-generated model of the star, which is shown with a similar model of our Sun for scale. The model is tilted on its axis 86 degrees from celestial northjust as the real Regulus appears in the sky. That makes the axis almost horizontal in this picture, and the equator almost vertical.

One additional oddity: Regulus axis of rotation happens to point in the same direction as its motion through the galaxywhich means it zips along (from right to left in this picture) like an enormous, spinning bullet.

The researchers observations of Regulus represent the first scientific output from the CHARA array, and will be published this spring in The Astrophysical Journal. The array itself was constructed with funding from the National Science Foundation (NSF), Georgia State, the W. M. Keck Foundation, and the David and Lucile Packard Foundation. In coming years the scientists will be pointing the array at many other single- and multiple star systems, using its ultra-high-resolution imagery to test the prevailing theories of how stars form, how they are structured, and how they evolve.