BERKELEY  Among the first results from the ultraviolet telescope SPEAR, launched last September aboard a Korean satellite, is a revealing new picture of the Vela supernova remnant showing the blast wave from an exploding star plowing through the interstellar medium.

Since February, SPEAR (Spectroscopy of Plasma Evolution from Astrophysical Radiation) began surveying the heavens to create an all-sky map of far ultraviolet (UV) emissions within our galaxy. These emissions come primarily from astronomically "warm" gas, at temperatures between 10,000 and about a million Kelvin.

The Vela supernova remnant, about 800 light years distant, is a much-studied ball of hot expanding gas - the result of a star's supernova explosion about 10,000 years ago. The walls of this blazing bubble of hot gas, about 100 light years across, are expanding into our galaxy at speeds of over 100 miles per second. Supernova explosions occur about every 50 years in the Milky Way Galaxy, but only a few supernova remnants such as Vela are close enough to Earth to study in detail. 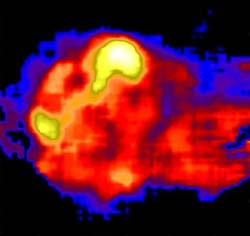 The far ultraviolet glow in the Vela supernova remnant tells astronomers where the blast wave from the exploded star plows into the interstellar medium, heating the gas to temperatures between 10,000 and a million degrees Kelvin. The colors indicate the intensity of glowing carbon IV, with blue the faintest and yellow the brightest. Image courtesy of Jerry Edelstein/UC Berkeley.

"SPEAR views the real action, where the blast wave smacks into whatever is floating around in space - the interstellar medium," said Jerry Edelstein, an astrophysicist at UC Berkeley's Space Sciences Laboratory. "This is the first time that the whole ball of fire has been examined in such detail. Until now, the ultraviolet picture has been a huge gap in our observations. When we put this new data together with all the other observations in the X-ray, extreme ultraviolet, optical, infrared and radio, we will be able to better understand how these supernova blasts expand into space."

SPEAR, the primary payload on Korea's first scientific satellite, STSAT-1 (Space and Technology Satellite 1), has also observed other energetic objects in the galaxy, including the Monoceros-Gemini supernova remnant and the Orion-Eridanus superbubbles. A superbubble can arise when many individual supernova occur nearby in time and space and join to form huge cavities and structures in the galaxy.

Edelstein and his UC Berkeley colleagues, Kaori Nishikida, PhD, and Julia Kregenow, will present the first results from SPEAR in a talk and two posters on June 2 at the meeting of the American Astronomical Society in Denver. He will summarize the results at a media briefing earlier in the day. 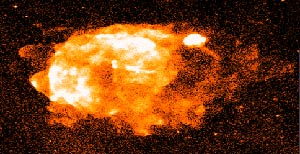 The Vela supernova remnant, the remains of a 10,000-year-old stellar explosion, as seen by the now defunct German X-ray observatory ROSAT. The X-ray glow is from million- to 10 million-degree gas heated by the explosion and filling a bubble that expands at more than 100 miles per second. Image courtesy ROSAT.

"The colors we see are uniquely situated to measure the speed and temperature of the walls of this outside shock of bubble, so, depending on whether it's bright in one or another color, we can tell you the speed of these shock waves," Edelstein said.

"The speed and brightness of a supernova's shock waves help us estimate the energy of the initial explosion and figure out whether the bubble can pop right out of the galaxy. The far-ultraviolet glow from these things is tremendous, shining with the equivalent of a trillion megaton nuclear bombs of energy every second".

SPEAR was launched aboard STSAT-1 on Sept. 27, 2003, as a collaboration between UC Berkeley and the Korea Advanced Institute of Science & Technology (KAIST), South Korea's leading engineering university. It's goal is to capture the first far ultraviolet pictures of hot and glowing gas in the Milky Way Galaxy, providing clues to the course of the galaxy's evolution.

"We expect to see this warm gas through the whole galaxy and discover how these supernova bubbles, of which Vela is one, spread and heat the entire galaxy," Edelstein said. "Where does all this hot gas go? That's why we are looking at the whole sky."

SPEAR was designed by Edelstein and colleagues at UC Berkeley's Space Sciences Laboratory, including project scientist Eric Korpela, PhD, in collaboration with scientists at KAIST's Satellite Technology Research Center and the Korea Astronomical Observatory. The instrument carries two photon-counting spectroscopes, each sensitive to a different range of wavelengths in the far ultraviolet. Edelstein's Korean colleagues include Professor Kyoung Wook Min of KAIST and H. W. Han, PhD, of the Korea Astronomical Observatory.

The UC Berkeley SPEAR effort is funded by $1.5 million from the U.S. National Aeronautics and Space Administration (NASA) and by additional funds from the Korean Ministry of Science and Technology.