This set of five photos was taken during the 2000 July 7 evening launch of a MSLS (Multi-Service Launch System) missile from Vandenberg AFB. The modified Minuteman II sent a mock reentry vehicle (warhead) and balloon decoy on a ballistic trajectory to the central Pacific for Integrated Flight Test 5 (IFT-5) of the National Missile Defense (NMD) system. Several minutes later a prototype interceptor called the Exoatmospheric Kill Vehicle (EKV) was launched from Meck Island in an unsuccessful attempt to kill the incoming warhead. The first four photos were taken by Brian Webb from Vandenberg AFB while covering the test for a news organization. The last image was taken by Kevin Sato. 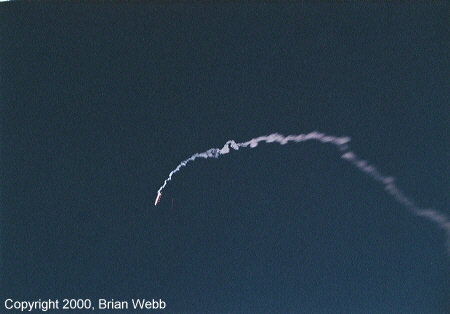 This time exposure was taken during the second stage burn just after first stage jettison and shows the smoke from the first stage solid rocket motor. 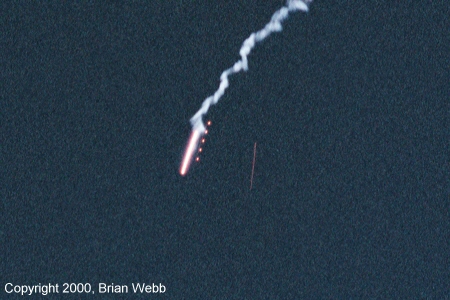 A close up of the first image showing the trail made by the spent MSLS first stage (orange dots). The first stage had been jettisoned and was still burning as it tumbled end over end. The orange line to the right was made by a burning piece of missile debris. 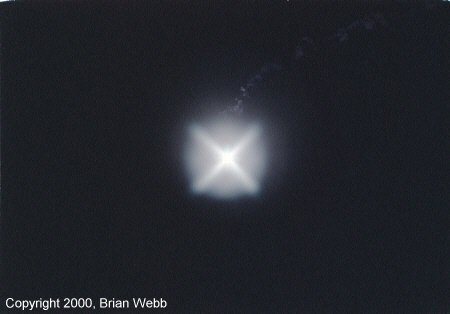 The third image was taken during the end of the MSLS second stage burn and shows the early stages of the expansion of the sunlit exhaust plume. 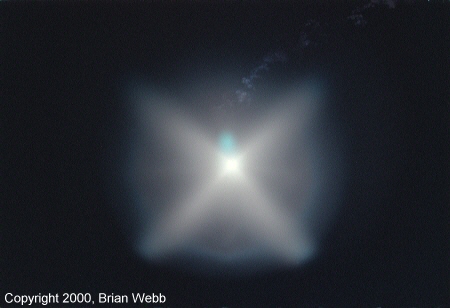 This frame was taken during the end of the MSLS third stage burn and shows maximum development of the sunlit exhaust plume. This is a view looking into the cone-shaped plume from the botton. The turquiose-colored patch is a long column of exhaust seen end-on. Compare this photo with the side view captured at nearly the same time by Kevin Sato (below). 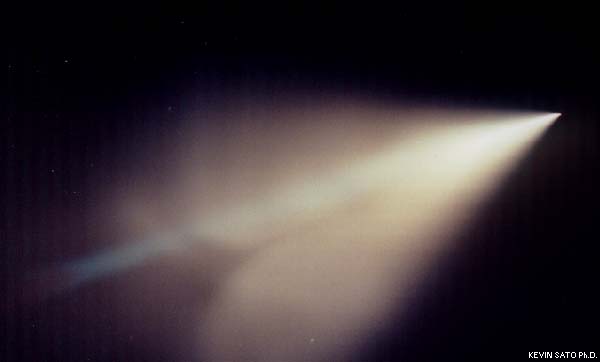 This last frame was taken during the end of the MSLS third stage burn and shows maximum development of the sunlit exhaust plume. Compare it with the previous photo taken at about the same time, but from the rear looking up the engine nozzle. Taken by Kevin Sato from Castle Rock State Park near Los Altos, California. Used with permission.