Two images of the 2004 September 15 launch of a Minuteman III strategic missile from Vandenberg AFB. The ICBM was previously on alert as part of the U.S land-based strategic missile force. It was selected at random and shipped to Vandenberg to be test fired. A visiting task force from the 341st Space Wing, Malmstrom AFB, Montana launched the missile under the direction of Vandenberg's 576th Flight Test Squadron. The Minuteman sent three unarmed warheads to the impact area in the central Pacific. 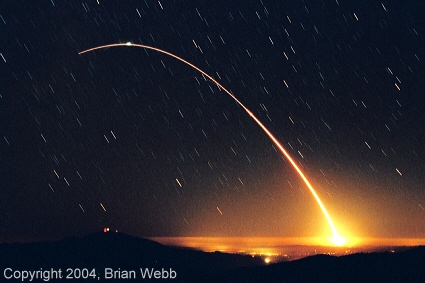 Film-based time exposure photo of the launch taken by the webmaster from the mountains north of Santa Barbara. For a large version of this image suitable for use as wallpaper, go to the Minuteman III Wallpaper page. 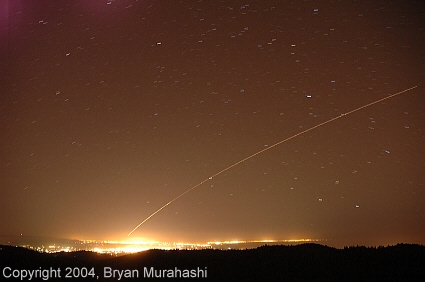 A digital photo taken by Bryan Murahashi from Loma Prieta Ridge overlooking Monterey Bay. Murahashi used a Nikon D70 camera, 18mm lens, and a tripod. The exposure was 154.4 seconds at f/3.5. The speed was ISO 400.