Boeing's Delta IV rocket made its West Coast debut on 2006 June 27 when a Delta IV lifted-off from California's Vandenberg AFB and placed a classified payload into orbit for the U.S. National Reconnaissance Office. The launch occurred at dusk and was seen and photographed over a wide area. The following is a collection of selected videos and images of the event.

The first several seconds of the launch including the burn of the solid rocket motors are visible in this video (.mp4 format, .mov format) submitted by Chris Johnson. Video Copyright 2006, Chris Johnson. Used with permission 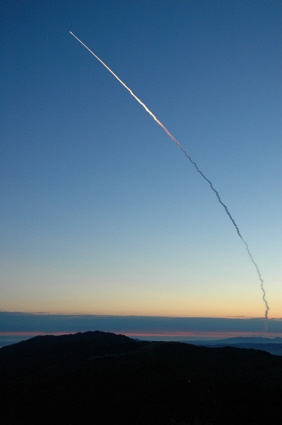 In this image the smoke trail from the booster's solid rocket motors is in the Earth's shadow near the ground, illuminated by the Sun at higher altitude. Image Copyright 2006, Brian Lockett. Used with permission.

The webmaster took the following photos from a high hill approximately 100 statute miles east-southeast of the launch site. He was one of several people who gathered there for the launch. 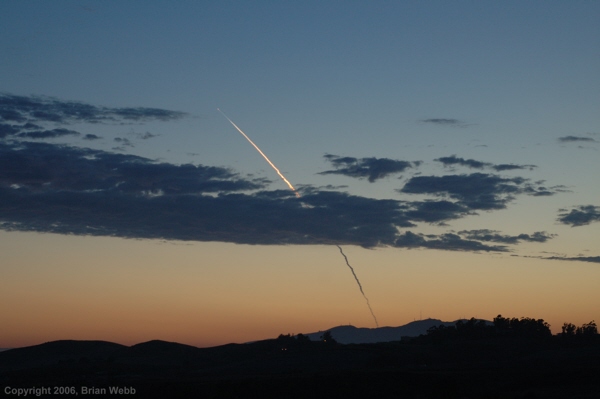 This image shows the smoke from the solid rocket motors during the early portion of the first stage burn. 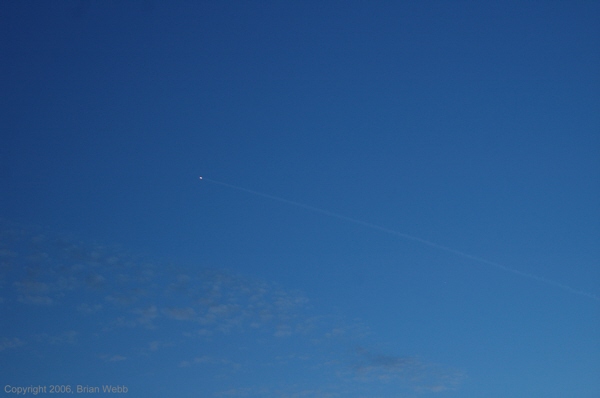 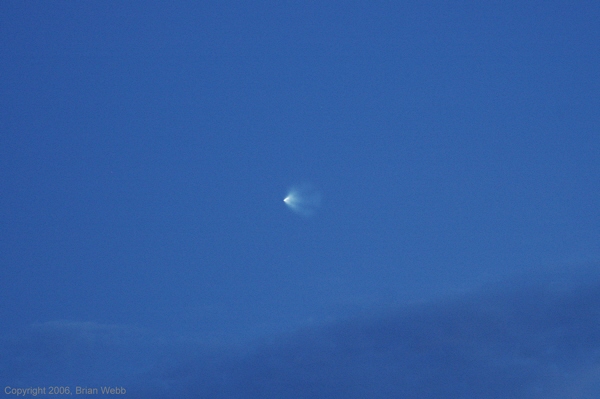 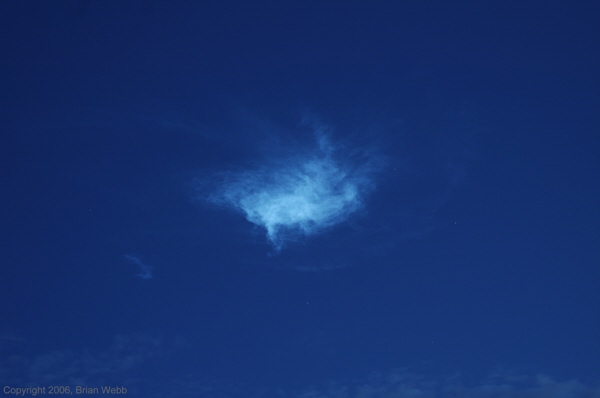 The exhaust plume from the Delta IV was less impressive than expected. One interesting feature of the launch was an unusual high-altitude cloud possibly created by stage1/stage 2 separation.

Behyar Bakhshandeh's backyard in Carlsbad, California provided a good side-on view of the launch and its aftermath. 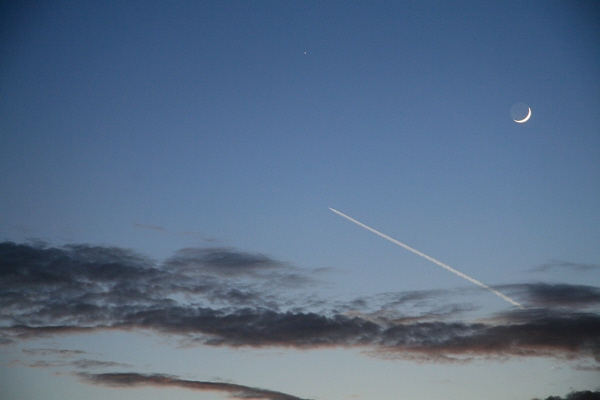 The Delta IV races downrange and passes below Venus and the Moon. Venus is the white speck above the tip of the rocket trail. Copyright 2006, Behyar Bakhshandeh. Used with permission. 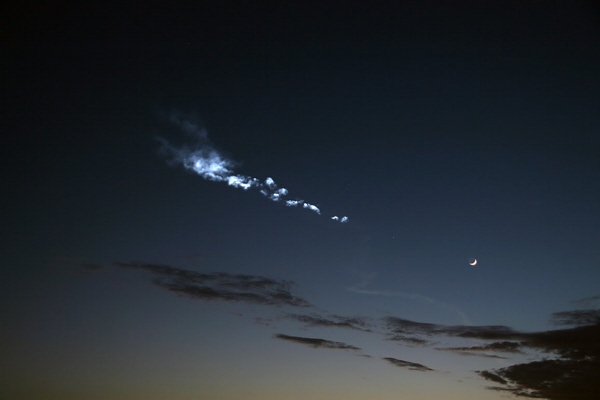 The aftermath of the launch hangs in the twilight sky. The bright cloud in the left of the image is the same cloud photographed by the webmaster. Also visible is the semi-transparent rocket trail, the Moon, and Venus (between the bright cloud and the Moon). Copyright 2006, Behyar Bakhshandeh. Used with permission. 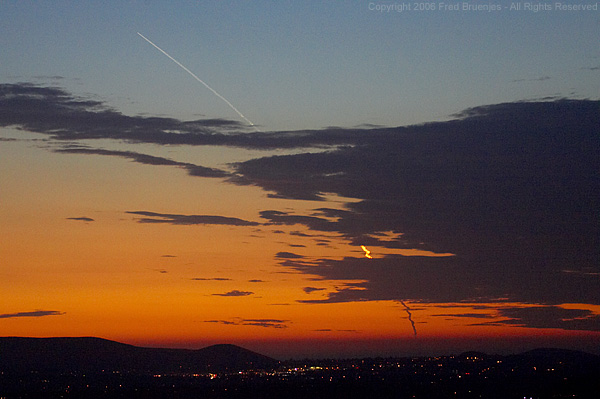 The Delta IV rises above the San Diego skyline. 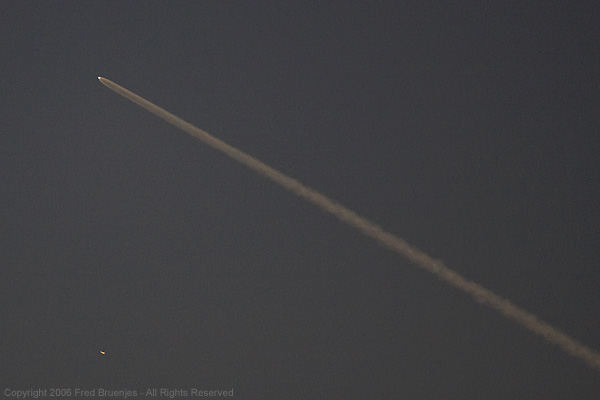 The rocket climbs, leaving a semi-transparent trail behind it. 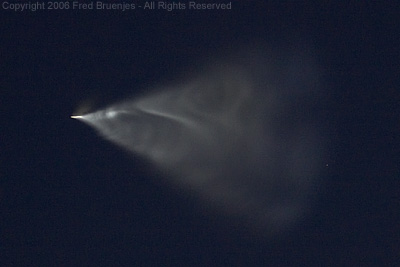 Bruenjes captured this detailed view of the plume from stage 2 ignition. 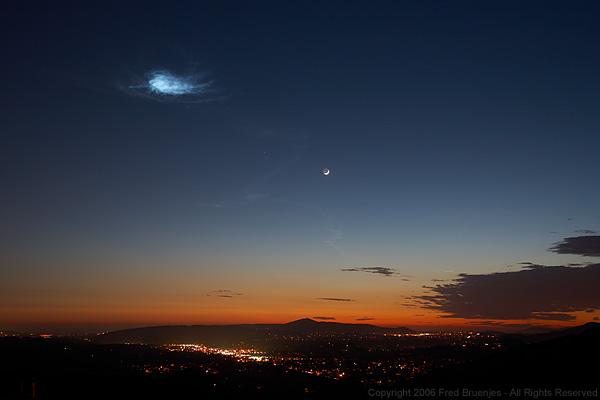 Afterwards, the enigmatic cloud from the launch and the Moon hang in the twilight sky.

About forty minutes after launch, the Delta IV's second stage and payload rose above the horizon in South Africa and the second stage was re-ignited for three minutes. Later, the second stage hydrogen tank was vented, creating a wedge-shaped cloud. Greg Roberts recorded the vent using a low-light video system. 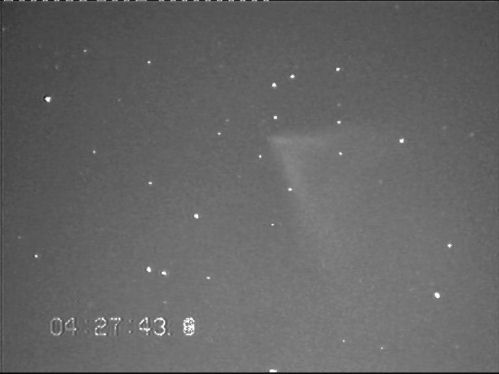 The cloud of vented hydrogen appears as a triangular smudge this 2-second exposure. Numerous stars are visible in the background as is the time of the photo (UTC) in the lower left. Roberts acquired this image using a 145mm telephoto lens set at f/2.5 and a MINTRON MTV-12V1-EX camera. Image Copyright 2006, Greg Roberts. Used with permission.